The City of Miramar Fire-Rescue Department was established as a volunteer service in 1955 with volunteers notified by the sounding of a civil defense siren located on top of City Hall.

By 1956 the Department had grown to be 30 members, including a women's auxiliary, and Miramars' first fire engine was delivered in October of 1957.

That first engine, the 1957 Howe, could pump 500 gallons of water per minute. In 1961, Miramar began constructing their new fire station.  That first fire station is now known as the City of Miramar Senior Center. 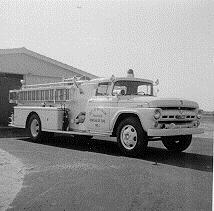 The second pumper Miramar purchased was a 1962 Howe, capable of pumping 750 gallons of water a minute, and bringing the fleet to two emergency vehicles.  In 1962, there was a tragic accident involving a young child and the volunteer firefighters saw how long it took for an ambulance to arrive to Miramar so following this they banded together and raised enough money to purchase Miramars' first ambulance.

The Miramar Fire-Rescue Department received its State charter in May 1962.

By 1974 Miramar would be hiring its first Fire-Rescue Chief, Chief George Van Edtvelt and then in 1975 its first paid firefighter/paramedics Michael Murphy and Tom Carney. Michael Murphy would eventually be promoted to the rank of Fire Chief in 1993.

On New Year's Eve in 1975, Miramar first began dispatching 9-1-1 calls with Frank Sullivan dispatching from Station 19 between 6 pm and 7 am. In 1981 the first firefighter's contract was signed and as they say the rest is history.
As a Department we proudly serve our Miramar family and look forward to continue making history together.